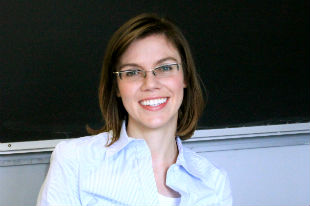 Dr. Barber is Associate Professor of Sociology and Director of the Women, Gender, and Sexuality Studies Program. She received her Ph.D. from University of Southern California and joined the SIU faculty in 2011. Her expertise lies in the sociology of gender with a focus on masculinities, culture, and work. Barber's research is guided by questions about what everyday boundary-crossing behavior can teach us about complex systems of inequality. Her book, Styling Masculinity: Gender, Class and Inequality in the Men's Grooming Industry was published by Rutgers University Press, 2016; and her 2019 co-authored textbook, Gendered Worlds 4th Edition, is published by Oxford University Press.

Barber is Co-Editor (with Tristan Bridges and Joseph Nelson) of the journal Men and Masculinities and current Chair for the ASA section on Race, Gender, and Class. She has served on the Gender & Society Editorial Board and as an elected member of the American Sociological Association’s council for the section on Sex and Gender and the section on Sociology of the Body & Embodiment. She is on the Editorial Board of Contemporary Sociology and has served as a grant reviewer for the National Science Foundation.

Dr. Diana Tigerlily is an Associate Professor of Practice in the Women, Gender, and Sexuality Studies program, and in the University Honors program. Her teaching and research interests include autoethnography and performance as feminist methodologies, spoken word as public advocacy, contemporary feminist theories, and yoga philosophy and practice. She earned a Ph.D. in Communication Studies with a Performance Studies emphasis and a Graduate Certificate in Women, Gender, and Sexuality Studies from Southern Illinois University, and an M.A. in English from Eastern Illinois University.

Office Administrator, Assistant to the Director

McCall Logan is an Actor, Playwright, Improvisor, and Instructor. Originally from London, Kentucky and then later attending Western Kentucky University, they received their B.A. in Theatre and Film studies. While at University and then later in Chicago, they grew tired of not seeing themselves in the characters that they auditioned for, and so they decided it was high time to change that. If you can’t see yourself in the characters being performed, then write your own! McCall is now dedicating their work to giving minority groups such as the queer community, more agency and dimension. They are currently attending Southern Illinois University, getting their MFA in Theatre, concentrating on playwriting, and a graduate certificate in Women, Gender, and Sexuality Studies.